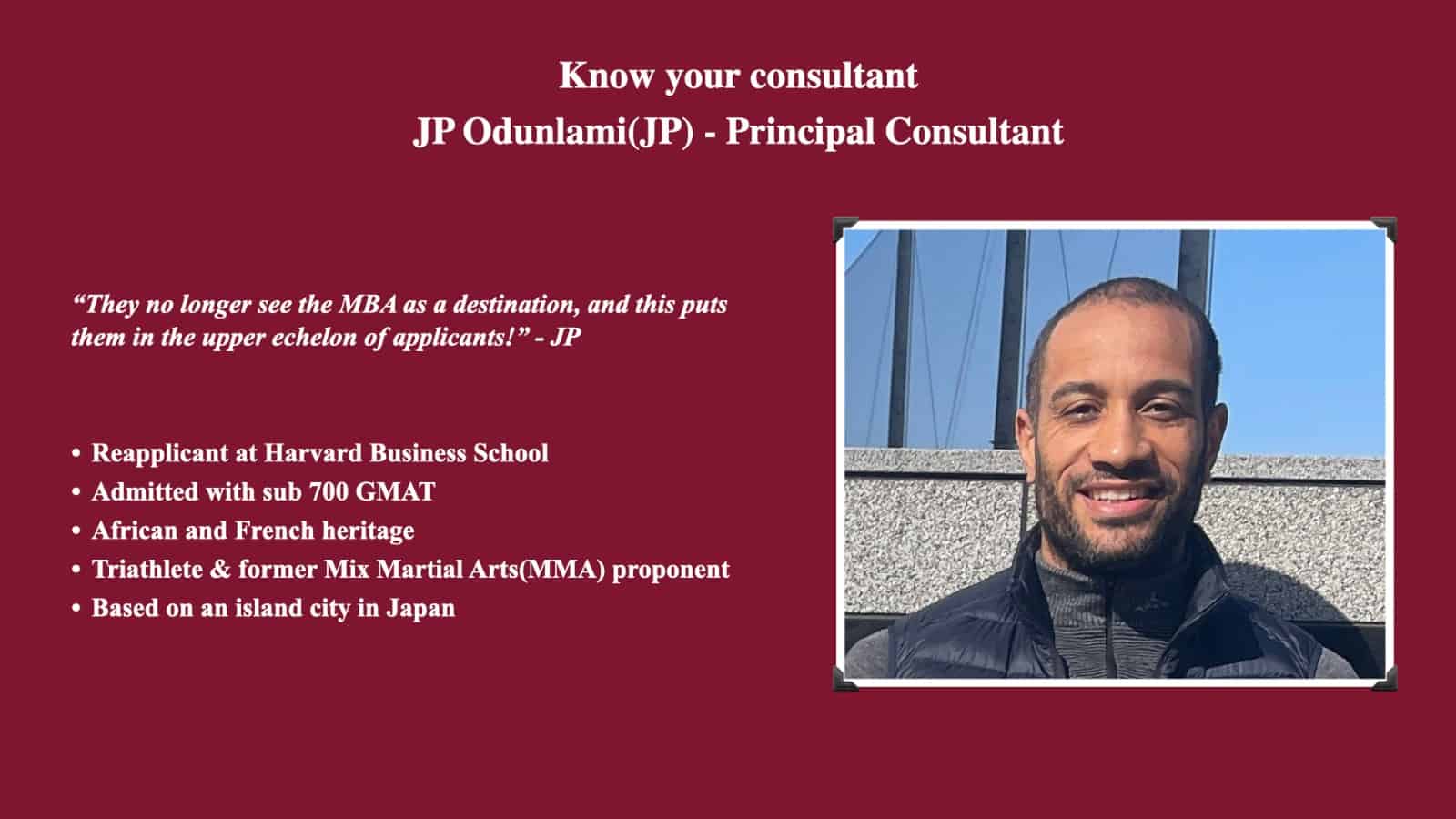 We are starting a new series of #candid conversations with individual consultants to get a sneak peek into their personalities and thought processes. Everyone is so much more than just their profile on paper. So here is an attempt to discover the “full selves” of our consultants, starting first with JP. 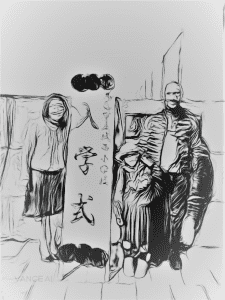 JP and family in Japan

JP is a HBS grad from 2007 and a veteran of the admissions consulting space.  His professional background spans the U.S., Asia, Europe, and Africa. JP has been a consultant and entrepreneur in investment management, cross-border acquisitions, venture capital and real estate development. He also worked in research and analyst roles at JPMorgan and Goldman Sachs in New York City.

His superpower is to help applicants who have one or more vulnerabilities in their profile (including applicants from a nontraditional background) gain an admit into the top 5 global MBA programs. JP also made it to a graduate law program at the University of Virginia and if had chosen law over HBS, he would firmly be in the corner of the “little guys” helping them gain an edge over the big institutions.

We simulated an in-person conversation over email and instant messaging and had great fun doing this. Hope you enjoy reading it.

Deepak Punwani (DP):  JP, you are a real renaissance man if one may say so. Among everything else you have done, what part of your role as a Principal Consultant have you enjoyed the most?

JP Odunlami (JP):  To me, the most enjoyable aspect of an MBA application campaign is helping someone develop a compelling vision of their future, laying out the steps to get there, and finally helping them implement them.  What often starts out as a fuzzy or sometimes ambitious long-term career goal at the beginning of the campaign often becomes reality in the ensuing months and years.  I really enjoy the progress and momentum, i.e., seeing each refinement of a tool or document, moving from one stage of the campaign to the next, etc.  The most thrilling moment is probably when an applicant tells me that they’ve really found an exciting path for the future and the program(s) that resonate with their long-term vision.  I often can hear or read their motivation and that’s when I know they’re really going to succeed.

If I’ve done everything right, when that happens, they don’t even care too much about the immediate application outcomes, because they’ve found their path.  The beauty of it all is that they’ve actually become the exact type of applicant that AdComs love: the person who is already heading somewhere exciting in their lives and just see the MBA as a potential accelerator.  They no longer see the MBA as a destination, and this puts them in the upper echelon of applicants!

In fact, I regularly receive emails from past applicants telling me that they are doing the exact job or venture that we were aiming for when they were applicants with me.

DP: Any particular email that stands out?

JP: Yes, I recently received a note from a former applicant who was working at a family manufacturing business in India when we first connected.  He is now in a very exciting private equity role in Chicago post-MBA, using his past knowledge while adding new tools to his arsenal.  To have played a role in helping him develop a vision and making it happen is incredibly rewarding for me.

DP: What’s the one piece of advice that you wish you could pass on to all applicants who are starting their application journey for MBA programs?

JP: It’s incredibly important to realize that the time when we aim to apply for an MBA is a unique period in life.  It’s this small window when we have a chance to reflect on what we’ve done, then imagine what we can do in the future.  That’s really what this time is for; the rest is just “paperwork.”  In the years prior, we often don’t have much work experience and we’re busy learning things.  During the MBA, life is super busy with job-hunting, networking and studying.  After, we’re again busy getting into a new role and trying to advance.

So the application campaign is really the only opportunity across a couple of decades when we have the maturity to understand where we’ve been AND to visualize where we could go.  It’s the perfect time to build a “life compass” or roadmap that can guide us for the next stage of our career and life.

DP: Share a glimpse into your favorite client engagement with us. What made it memorable?

JP: One recent example comes to mind. I was working with an experienced military client who had gone through some very tough professional and personal times.  We were able to really lean into his inner strength and conduct a very effective campaign.  He fully trusted me and understood how his experiences would make him a valuable contributor in school, and a great human being, generally.  He ended up at Harvard Business School, even though the odds weren’t especially strong in his favor in the beginning.

Another recent engagement was with someone who had really, really big health problems in university, combined with some personal tragedies.  Rather than seeing him as a victim of circumstances, I saw someone with superhuman resilience and whom I knew could really work hard, be humble and reflect.  This led to a very successful campaign and an acceptance to Stanford and Wharton, despite an initial profile and background that most consultants would have called unexceptional.

DP: Have you gotten better at predicting (early on in the campaign) who will succeed at their dream schools?

JP: There are still occasional surprises.  But typically, I can see who is committed and realistic from the beginning.  Interestingly, those who have already achieved big things in life are the ones who add “safety” schools to their targets with us.  They know that to achieve, you must focus on what you can control.  In the case of MBA campaigns, it’s really the introspection, career vision, hands-on research and implementation.  Much of the actual decision by the Admission Committee is impacted by who else is applying, which profiles are preferred that year, and so on.  So there’s no real control over the outcome: more than 50% is out of our hands.

It’s often those who have no idea what it takes to reach certain levels of excellence who say, “I only want to apply to X school and it’s all that matters to me.”  It’s really a strategy to avoid working on themselves and what they can control.

I’ve learned that some people like to keep a dream as a feel-good mechanism, rather than taking the difficult steps needed to achieve it.  Some don’t dream much but try to do their very best at each step in front of them – and that’s who often ends up with surprisingly exciting results compared to expectations when we began the campaign.

DP: What part of the process causes applicants the most anxiety?

JP: The most common worry, especially for applicants from Asia (and India in particular) along with  Europe, is the GMAT.  We all grew up in school systems where the final exam determines everything.  So applicants from these regions often stress themselves over the GMAT, thinking that it’s the key to getting into a good school.  I quickly dispel this notion, and hopefully most of the related anxiety, when I show them during the kick-off call how the GMAT fits into it all and that it’s at most 15% of the overall evaluation.

Conversely, I find that most applicants from test-based systems are totally unaware of the importance of the “ground campaign.”  This is where you have to connect directly with the various programs to identify the resources that match your long-term aspirations.  This means contacting students, alumni, professors, conducting campus visits, and so on, all in a way that aligns with your long-term career vision.  This is as or more important than the GMAT score, especially for US programs.  But it’s a rather new experience for many applicants, and it can be daunting for those who are introverted or have never done any type of outreach.

DP: If you were to redesign the application process, what would you change about it?

JP: I would do away with the deadlines and change to a rolling system, with a smoothing process so that no one is penalized by timing.  Schools like INSEAD have come close to this, with every round being weighed almost equally.  I would also add an early admission window with a commitment requirement, which schools like Columbia and Duke have.  That way, individuals who have found the right program can apply early and commit right away, with their chances maximized.  For the rest, they can take their time and apply when it’s right for them, whether it’s March, July or October, without being penalized.

DP: Thanks so much JP.

JP and other talented consultants on the team are ready to start #candid conversations about your candidacy: request our free, expert evaluation now