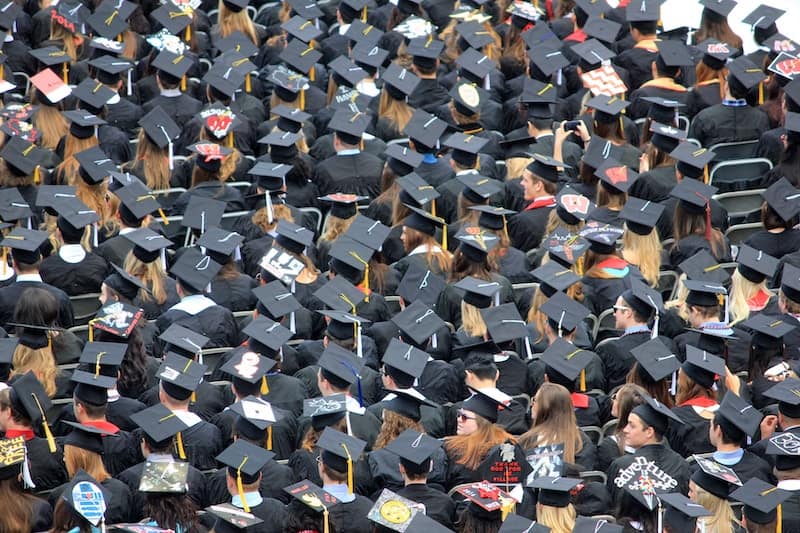 I can scarcely believe that it’s been a decade since I formally started advising MBA applicants. After analyzing the process and results of nearly 900 such admissions campaigns, now feels like the right time to share my learnings in hope of providing future b-school candidates from India with added perspective and more positive outcomes.

Many of my admissions consulting engagements have started with the same question asked by eager applicants: “Can you rate my chances for acceptance at school X?” As much as I’ve wanted to ease their anxiety, the fact is that predicting admission outcomes isn’t a perfect science. Far from it.  Even an advisor who brings maximum expertise, experience, judgement and intuition to the fore cannot provide a 100% accurate answer to this question. However, this doesn’t mean that applying to b-school is opaque or random. Or that putting in the “hard yards” on your application (either by yourself or with support from an admissions consultant) won’t materially improve your chances.

The final result of an admissions campaign also depends on major external factors. How competitive is the current applicant pool? Specifically, how many applicants with a similar profile are applying to that very same school in the same round? Is there an effort by the adcom at this time to increase acceptances from a particular category of applicants?

Given all of the challenges and uncertainties faced by today’s MBA candidates, I want to identify trends in external factors that I have seen first-hand over these 10 years. Since the Indian MBA applicant pool is one of the largest and most competitive, I am focusing on seven trends that impact this segment directly:

1) Democracy has dawned and its light is spreading

As India is the world’s largest democracy, it’s only natural that applicants from this country consider “equal opportunity” to be the norm elsewhere in the world. Not always so. Current MBA candidates may find it difficult to believe but, just 20 years ago, the majority of admits at top ten US business schools were relatively “blue blooded” in terms of their professional experiences and personal history. Last names and company names mattered as did the stature and standing of an applicant’s family. The pursuit of greater diversity by business schools began in earnest at the start of the new millennium and has only accelerated in the past few years. So, it’s no longer unusual to find a female applicant from a traditional Indian family who lived in a village without electricity make it to a top 3 ranked  US business school. Or to see a male applicant who grew up studying in a local language school in western India, and started learning English only in his early 20s, get admitted to top 2 ranked European school in a city considered to be the home of the Queen’s English.  This levelling of the admissions playing field should inspire otherwise reluctant applicants from India to aim high when pursuing their MBA dreams.

The fact that individual achievement and potential have found their rightful place among admissions criteria, transcending personal pedigree and family net worth, as true measures of an applicant’s competitiveness leads to another trend.

In his famous Oscar acceptance speech, iconic actor Leonardo DiCaprio mentioned that the production crew for his film “The Revenant” had to travel to the southernmost tip of South America to find sufficient snow for an authentic backdrop. His point was that snow-laden locales have become increasingly difficult to find due to global climate change. Similarly, the democratization of business school admissions has meant that truly diverse profiles within the Indian applicant pool are now more difficult to locate.

More than half of the Indian candidates who engage the admissions consulting services of The MBA Exchange, when asked if they consider themselves to be a “diversity candidate,” answer in the affirmative. These individuals include those working for investment firms (i.e., venture capital and private equity), foundations or NGOs, renewable energy firms, and government or public-policy think tanks. A decade ago, they would have had a truly differentiated profile among Indian applicants to top-ranked b-schools. Not anymore. Today, such “diversity” isn’t so diverse. Therefore, it’s best to assume that there will be many other candidates similar to you in terms of background and qualifications. Thus, the greatest differentiator among Indian applicants today is how they tell their story rather than just their professional resume.

3) The GMAT is a game theory experiment

Anecdotal evidence suggests that the historic average GMAT score for Indian applicants accepted to top 10 schools has been at least 10 points higher than the global average. At some schools, this difference has been as much as 20+ points despite the fact that the global average GMAT score itself has climbed significantly. The liberalized GMAT policy that allows candidates to cancel scores, and even to reinstate them later, has become a major contributor to this score inflation, thus negating the historic edge for those Indian applicants who achieved a high score in their first or second attempt. The GMAT has become a “game theory experiment” where repeated test taking worldwide leaves many Indian applicants relatively less competitive. We now have candidates with, say, a 740 score who routinely retake the test intending to achieve a 750+ and then cancel any new score that falls below 740. As an outcome, the average number of GMAT attempts for Indian applicants who engage our services has climbed steadily since 2015 when this new policy came into place. 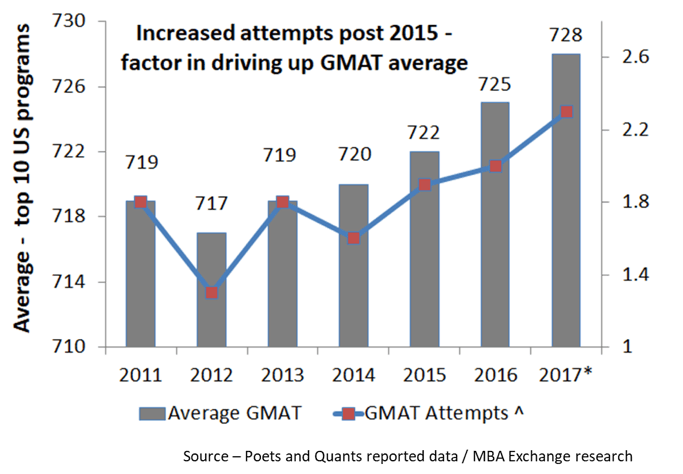 *In 2017 there was a significant drop in applications at top 10 programs per Poets and Quants. Evidence suggests that increased GMAT attempts contributed to higher average GMAT despite a decline in the number of applicants
^ Average number of GMAT attempts undertaken by our India-based applicants

So, how can an MBA applicant from India succeed in this GMAT game? The answer for many may be to revert to the other standardized test, the GRE. Why? The GMAT algorithm tests for both speed and accuracy. One must answer accurately in the Quant section in order to achieve a high percentile. For example, the graph below shows how a Q47 (out of a possible 51) scaled score has slipped in percentile over the years. For applicants who are stuck in this range, it would take a 95% percentile score on the Verbal section to achieve the average overall GMAT score for admits to top 10 schools. So, if this GMAT score seems out of reach, it may be a better idea to take the quant-friendlier GRE. 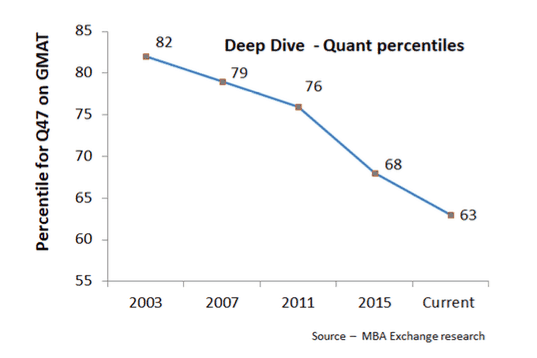 4) The road West ultimately leads back to East

One of the most noticeable trends during the past decade has been Indian applicants intending to return to their native country immediately post-MBA. This is a reflection of multiple realities, including a growing national economy, tightening of visa rules in the western world, and a desire to contribute to positive change back home. Adcoms have come to respect and even support applicants with this goal. As an illustration, a growing number of MBA graduates are opting to join their “home” office when recruited by McKinsey, Bain and BCG.  Therefore, we are finding that MBA applicants from India who have career goals that would bring them back to India after business school should not shy away from stating those goals with precision and passion.

5) Entrepreneurs are welcome – but must be prudent

Another defining trend of the past decade has been the sheer number of entrepreneurs and early-stage startup employees from India pursuing top MBA programs. For the first time in 2017, the number of our clients from India with this particular professional profile represented more than a third of the total of our Indian clients. This trend should only accelerate in the future as more than 50% of our Indian applicants in 2017 had a goal of founding or joining a start-up enterprise within five years of graduation. Their post-MBA success will inspire future entrepreneurs and employees from startups in India to apply.

At the same time, there can be an added hurdle for those entrepreneurs whose ventures show signs of becoming a “rocket ship” and/or who have already attracted substantial investment. That is, the onus is on them to explain why they really need an MBA education given the high trajectory of their business. So, those who believe their venture is the next big thing may face an adcom with doubts about their true motivation and goals. Therefore, producing a compelling application and a convincing admissions interview that leverage but don’t oversell one’s entrepreneurial prowess are more important than ever.

6) The future is more specific

While most business schools have reduced the number and word-count limits of their essays over the past decade, the need for applicants to be specific when talking about goals has grown. Today, applicants are expected to have a firm grasp of their short- and long-term goals in order to answer the key questions: “Why an MBA, why now, and why this school?” Anecdotal evidence suggests that an authentic, well-articulated goal can help mitigate a candidate’s current vulnerabilities, even a below-average GMAT score, at some schools. Conveying a sharply defined goal makes school selection more credible and demonstrates the MBA admissions version of “product/market fit.” Another benefit of presenting a specific career goal is that the applicant can elaborate, in essays and interviews, on how he or she will benefit from and add value to certain student organizations and campus initiatives. Not only does such clarity increase the chances for admission, but it also enhances the total MBA experience upon enrolment.

The explosion in the popularity of social media in the past decade means that a connection with most a b-school community is just one click away for applicants worldwide. However, while accessing admissions officers, alumni, students and professors has become easier, achieving true “engagement” with them requires more effort and expertise. Many Indian candidates err on the side of restraint rather than proactivity and enthusiasm in such communications. However, we have seen successful applicants from India establish a strong rapport with school officials prior to applying that proved highly beneficial during interviews. Social media offers applicants the chance to engage with gatekeepers to establish their personal “brand” early in the application process and thus gain a competitive advantage.

Over the past decade, these 7 trends have changed the macro landscape significantly for MBA applicants from India. But on a micro level, what remains constant for them and all candidates is the need to present a candidacy that represents a true “value exchange.” That is, adcoms welcome those individuals – regardless of nationality – who truly want and need the school’s offerings, and who can enrich their classmates, strengthen the alumni network, and enhance the MBA program’s reputation. There’s no reason why applicants from India cannot harness current trends, overcome emerging obstacles, and achieve even greater success in this value exchange.

This article appeared first on Poets and Quants as What I’ve Learned Helping Nearly 900 MBA Applicants In India.